Tesla Inc. looks more than ever like a mature company, with 11 consecutive quarters of profits and long-term production goals. Yet analysts couldn’t disagree more about where the shares of Elon Musk’s company are going.

Their price targets — predictions for the electric-vehicle maker’s stock 12 months from now — range from a low of $250 to a high of $1,620, according to data compiled by Bloomberg. That’s the widest gap of any company in the S&P 500 Index. Tesla closed at $769.59 Friday.

“It is so hard to value Tesla because some see it as a tech company getting involved with some massive addressable markets: autonomy, EV, robotics and energy,” said Gene Munster, a former technology analyst who’s now a managing partner at venture-capital firm Loup Ventures. “Others see it as just another car company. And based on which side of the coin you fall on, influences your view.” 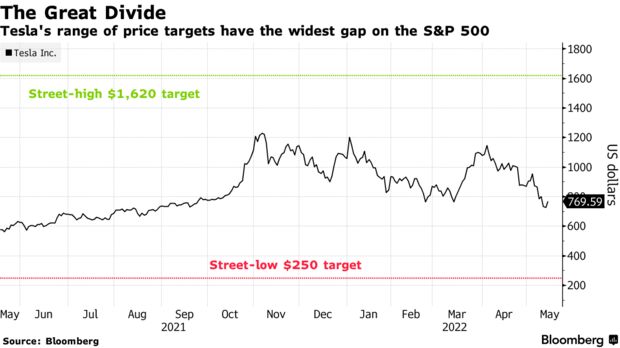 Musk’s outsized, Twitter-driven public personality and the undeniable cool factor of Tesla vehicles have helped drive investment in the stock. But that doesn’t help analysts guess how much the company will be earning in coming years.

“Looking to the second half of this decade and beyond, it’s still difficult to model what long-term sales and earnings growth will look like,” said Garrett Nelson, an analyst at CFRA Research, pointing to the future of its software sales, Optimus robot and solar products as unknowns. He expects the stock to climb to $1,350 in the next year.

And it’s not cheap. Tesla is priced at 58 times estimated earnings for the next year, while all of the big global car companies sell for less than 10 times profit.

Even assuming Tesla is more of a technology company than an automaker, it looks expensive: The price-earnings multiple is higher than all of the so-called FAANG stocks, which enjoy similar reputations as fast-growing businesses and devoted investor fan bases.

“The expectations for future car sales that are baked into the stock price have always been ridiculous,” said David Trainer, chief executive officer of research firm New Constructs, who has a sell recommendation on the stock. The gulf between current profits and the future earnings implied by the stock price remains large, he said.

But bulls have history on their side. Tesla’s shares have climbed more than 22,000% since it went public in 2010, giving investors an annual return of 58%. The S&P 500, on the other hand has returned 373% including dividends in the same period, averaging 15% a year.

The economic and political backdrop also hasn’t dented investor enthusiasm for its stock. Just last month, Cathie Wood’s Ark Investment Management upped its price target for the stock and now expects it to more than quadruple to $4,600 by 2026.

There’s also Musk’s popularity. The chief executive officer has a huge following with retail investors and that’s not something that can be easily valued.

“There are almost no other public figures who garner the attention of retail investors more than Elon Musk,” said Robert Schein, chief investment officer at Blanke Schein Wealth Management.